Decipher Tools > Blog > Breaking it Down: How Twitter Lost 4 Million Users Due to iOS 8 (and iPhone 6 Upgrades)

Twitter's company earnings call yesterday has started a storm of news about how Twitter lost users due to the release of iOS 8. There are two major components cited for the lost users:

When I first started writing this article, I was furious at the idea that Twitter was counting users from the Shared Links section of Safari if it required absolutely-zero user interaction to initiate a feed refresh from Twitter. So, I did what any good crazy-developer does, and I ran a man-in-the-middle attack on my old iPhone 5s running iOS 7.1.3 so I could see when the Twitter feed is actually pulled.

The Twitter feed is fetched only when the iOS user clicks on the Shared Links section of Safari, so honestly, I would take this as honest user intention to view Twitter and other social networks they have setup. 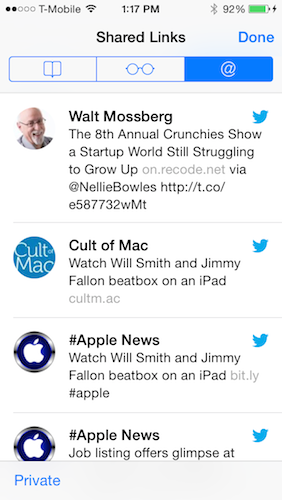 So then I was curious what changed in iOS 8 to mess this up. I opened Safari on my iPhone 6+ and clicked on the Shared links. My Shared Links were empty, but my Twitter account showed listed and enabled (and I failed to take a screenshot!) The Settings app showed my Twitter account listed, but only after I clicked on it, did I learn that my password was missing from my Settings app. Once I entered my Twitter password into Settings again, the Shared Links appear.

I backup and restore my iPhones a lot, and I do a lot of other goofy things to them because I work on corrupt backups and iOS bugs. But I was relatively sure my iPhone 6+ was restored from an encrypted backup, so I'm perplexed at why my password was missing in the Settings. I'm even more perplexed that I had to dig quite a bit to find this out, and in most places iOS showed me that my Twitter setup was fine. So I think there's some legitimate claim here that iOS 8 is contributing to a lack of Twitter use from Shared Links nonsense.

Update: The issue I mention directly above is one of the primary issues that Twitter is referring to when saying iOS 8 caused them issues. In early iOS 8 there was a bug that required users to reauthenticate their Twitter account.

Here is my outline of password migration as it relates to Twitter and iOS versions and device changes:

So there are plenty of paths that lose the Twitter password, like using an iCloud backup to migrate to a new iPhone 6 or iPhone 6+. Also, as I just mentioned above, I migrated my data properly to ensure that I kept my passwords, but the reauthentication bug still got me.

I can definitely see a very casual Twitter user hitting the login screen and deciding they don't care enough to do the password recovery mechanism at the moment, and fading away from Twitter for a while. So there is a legitimate point here about Apple putting a barrier-to-entry on casual Twitter users with it's password migration strategy.

Save and print Facebook Messenger messages on your computer.

Save and print Instagram direct messages on your computer.

Save and print Twiter direct messages on your computer.

Fix problems in a corrupted iPhone, iPad, or iPod Touch backup so you can restore in iTunes.

Save iPhone and iPad voicemails to your computer.

Get insight about your family's iPhone, iPad, and iPod Touch usage without snooping.